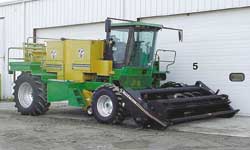 When a group of farmers, researchers and soil conservationists in south central Iowa got together awhile back to sell a power company on the idea of burning prairie switchgrass to generate electricity, everyone knew that if the idea was approved, the hard part would be harvesting the native prairie grass.

Switchgrass is a native prairie grass that's seeded on much of the CRP ground in southern Iowa, Illinois, and Missouri.

When grown as a fuel crop, the grass is allowed to reach full maturity. If left standing for 10 to 14 days after a killing frost in the fall, it's usually dry enough to cut and bale the same day.

Gary Kelderman of Kelderman Manufacturing, Inc., Oskaloosa, Iowa, is a member of the committee studying the feasibility of switchgrass fuel. To solve the harvest problem, he put together a direct-cut baler that cuts and bales in one pass.

Kelderman mounted a Freeman big square baler and a Deere cab on a Kelderman factory-built frame. The cab rides on a custom-built air suspension system that allows 9 in. of travel. A 14-ft. sickle head up front cuts the grass and feeds it to the baler. The machine is powered by a Deere 8.1 L Powertech engine which puts out 300 hp and can reach a maximum speed of 30 mph. The transmission is a 4 speed with 4-wheel hydrostatic drive.

Kelderman spent much of the past summer testing and perfecting the baler in order to have it ready in time to harvest switchgrass for the project this fall. Lack of a timely killing frost kept him from using the direct cut header, but even so, he baled some 3,000 bales for the project. Before the switchgrass project he was able to bale four cuttings (3,000 bales) of alfalfa with no problems.

He plans on having the direct cut baler available again next year for the ongoing energy project. In addition, he says such a baler could be used for cutting and baling small grain straw, dried cornstalks, stubble from grass seed production, etc.

He says operator comfort, visibility and control are excellent. Kelderman's self-propelled baler weighs only about 34,000 lbs., where a comparably sized baler behind a 300 hp 4-WD tractor would have a combined weight of about 50,000 lbs.