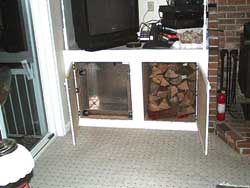 When Sherwood and Elizabeth Beatty built their dream home near Barton, Vermont, the transplants from Louisiana knew they wanted to heat with wood as much as possible.

They were determined, however, to avoid the mess and effort required to get firewood into the house.

So when they built their house, they included a dumbwaiter that brings wood right to the fireplace in their living room.

They got a surprise when they contacted manufacturers. "The cost was going to be enormous," Sherwood says. After considering what was needed make what they wanted, Beatty figured he could build it himself for a lot less.

After the contractor provided the rough opening for the shaft, Beatty put 4 by 4's in all four corners of the opening to support a track for the little elevator. Then he had a fabricator build a heavy-gauge aluminum box that measures 24 in. wide by 20 in. deep by 20 in. high. On each of the eight corners of this cube, they attached two caster wheels in such a way that they straddle the corners of the 4 by 4 track.

The casters fit fairly tight, so the box rolls up and down the track without swinging or wobbling.

The main feature of the Beattys' dumbwaiter is that it's raised and lowered with a screw-drive garage door opener. "We used a 1/2 hp Genie opener," Sherwood says. "The motor mounts on a platform below the box in the basement and the jackscrew runs up the back of the elevator shaft."

Beatty bought a second Genie carriage mechanism and attached it and the one that came with the opener to the back of the box -- one centered on top and the other centered at the bottom -- so the single jackscrew runs through both. He says this spreads the lift load and should add to the life of the carriage mechanisms.

To provide counterbalance for the dumbwaiter, Beatty attached a couple of 10-lb. window sash weights to the upper rear corners of the dumbwaiter box with nylon ropes over pulleys at the top of the elevator shaft.

To make operating the dumbwaiter as safe as possible, Beatty ran the wiring for the control through a doorbell switch placed so the cabinet door in the living rooms must be closed to depress the button before the elevator can be operated. "I looked at micro switches to put on the door, but the doorbell switch actually is better suited for this because it requires no over-travel adjustment -- and it cost a lot less," he says.

Beatty uses another push button doorbell switch in the basement to control the dumbwaiter. "A remote control would be totally inappropriate for this," he says.

The Beattys store firewood just outside the basement door. To get wood to the stove, they carry it the short distance into the basement, load 30 to 40 lbs. on the dumbwaiter, and raise it up to the living room. Once the dumbwaiter is raised, they open the cabinet door and transfer the wood into the adjoining storage cabinet.

The most expensive part of the dumbwaiter was the aluminum box. The Genie garage door opener, the lumber bill for the 4 x 4's and material to make the platform in the basement, and the casters were minimal costs. They paid a junk dealer for the two sash weights. With the cost of the door latches, pulleys, rope and the doorbell switches added in, they figure the cost of the dumbwaiter was still extremely low. They bought a second opener as a precaution against not being able to find parts to repair the door opener sometime in the future. Even with that added in, they still saved thousands of dollars over the lowest bid from a manufacturer.