He Built His Own 12-Row Corn Head 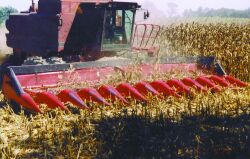 I've used it to harvest more than 2,600 acres of corn with no problems. I saved a lot of money by building it myself,  says Fesmire, who uses the header on his 1994 Case-IH 1688 combine.

He paid for a used Case-IH 1043 4-row header. He stripped both headers down and used a 30-ft. length of steel tubing to build a new frame. He added two row units to each side of the 8-row header. He bought a new 30-ft. long, 16-in. dia. cross auger and cut it down to a 14-in. diameter to fit the header trough. He also extended the driveshafts on both headers in order to drive the row units. He added a new row divider on one end of the header. The drives and rollers themselves are all original. The 12-row header uses the 8-row header's quick-tach adapter.

I really like it. The combine actually does a better job of threshing with the 12-row header than it did before with the 8-row,  says Fesmire.  It has shelled some 150 and 200 bu. corn with no problems whatsoever. In the field I do have to slow down from 4 to 3 mph, but that's okay because as I get older I find that slower is better.

I paid  for the cross auger,  a new row divider, and for new steel. My total cost was much less than a new 12-row Case-IH header would have cost.

I was concerned about the weight of the 12-row header but it hasn't been a problem. In fact, my header weighs about 700 lbs. less than a Case-IH 12-row header. I did add water in the rear tires for extra ballast. When I rebuilt the header I considered adding a poly row divider, but I found that there isn't much weight difference between poly and metal dividers so I bought the metal one instead.