Want To Buy A Caboose? 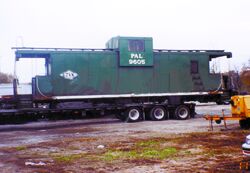 Looking for an inexpensive cabin or guest house? You might want to look into buying a caboose.

Bobby Johnson tried for years to get his hands on one, and he finally succeeded. In fact, he bought two and he has a line on five more.

The railroads stopped using cabooses a few years ago and they're not being built any more. All the old ones are being sold off.

"If you want one, you have to keep checking and calling around," says Johnson of Webster, Kentucky. "I kept calling a guy for two and a half years. I apologized for bothering him, but I told him I wasn't going to stop."

Johnson's contact came from a friend who worked for a large railroad company. He's planning to use one of the cabooses as a backwoods cabin and he's going to donate another to his hometown of Emons, Kentucky.

Johnson plans to keep his caboose original. "I'm going to set it up on a short track, get it sandblasted and repaint it," he says. "It has a combination heating and single burner cook stove, an ice chest, clothes storage, two bunk beds and a little porch on the back end."

Getting the caboose to its final resting spot was the tough part. The all-steel exterior and wood interior comes in at around 33 tons. Johnson advises getting a 40-ton forklift/crane to load and unload it.