Motorcycle Sidecar For The Disabled 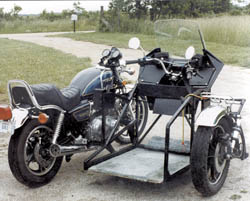 "I was injured in a car accident back in 1963, which paralyzed me from the waist down. But it didn't stop me from searching for ways to enjoy life," says Russell Headley, Fort Scott, Kan., who recently sent FARM SHOW photos of motorcycle sidecars that he builds for wheelchair-bound people.

"I built my first sidecar after helping convince my parents to allow my brother to buy a motorcycle. After I saw how much fun he was having, I just had to find a way to go along, too," says Headley.

Over the years he has built 20 different sidecar bikes, six of them for himself. "I put about 17,000 miles on a Kawasaki sidecar one summer," he notes.

Each sidecar is built entirely from scratch. The wheelchair rests on a carpeted platform and is secured by a seat belt around the back of the wheelchair. The wheelchair's footrest is braced against an angled "stop" on front of the platform.

The motorcycle's handlebars, with its clutch, throttle, brakes and wiring, are moved over to the sidecar. A gear shifter mounts on the left side of the sidecar and is connected by cables to the motorcycle. There are mirrors on the handlebars, and a plexiglass windshield provides wind protection for the driver. An air shock mounts next to an 18-in. wheel that supports the sidecar.

The sidecar is attached to the motorcycle with a custom-built mounting system built from 2-in. sq. tubing, with attachment points at the motor mounts and foot pegs. The passenger on the motorcycle holds onto a bar mounted in place of the handlebars.

"As far as I know I'm the only one who builds sidecars like this," says Headley. "There used to be some other manufacturers but they all went out of business because of problems with liability and insurance. I've never charged anyone anything but what it cost me in materials and welding supplies. The only gauges still on the motorcycle are the tachometer and speedometer. To start the motorcycle, I simply simply reach over to turn the motorcycle's ignition key. I use my left hand to squeeze the clutch on the handlebars and bump the gear shift lever with my left elbow. It takes very little pressure to shift it, so I can go right through the gears. I use my right hand to control the brake and throttle."

Headley says his prices vary according to the kind of motorcycle you want and the accessories you choose. His latest project is to build a sidecar on a bigger bike, a Honda 1,200 Aspen Cade. "I'm 60 years old now and not as strong as I used to be, so I'm not building sidecars for sale any more," he notes.