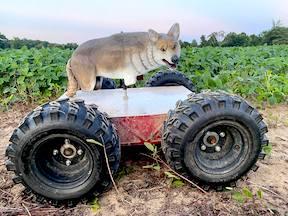 Earl Pancoast was fed up with deer feasting on his soybean fields, so he invented Deer-Dash, a robot designed to keep deer on the run as it travels around the field with a coyote decoy on its back.

Ive had entire fields cleaned out by deer, says Pancoast. They walk down the row, snipping off the beans. With as many as 50 deer in a herd, it doesnt take long to mow a field down to nothing.

Building a robot to chase the deer away was a natural solution for Pancoast. His combat robots have appeared on Discovery Channels BattleBots. His first Deer-Dash prototype was based on his Bale Spear combat robot and used many of the same components.

I combined my two hobbies of building robots and farming, says Pancoast. I see coyotes chasing deer and decided to try and duplicate that.

He ran trials with the prototype and its plastic coyote in 2021. Even with breakdowns and difficulty getting parts, results were positive enough to do an upgrade.

I compared two fields that were treated the same with the only exception being the Deer-Dash operating in one, says Pancoast. It improved yield in that field by 10 to 15 bushels over the control.

This year he is bringing a new and improved version to the fields. It is 30 by 34 in. and about 2 ft. tall, before adding the decoy. The 13-in. tires are from a garden tiller with other parts salvaged when possible. It has a 3/16-in. aluminum shell body and a dressed-out weight of about 150 lbs.

I use drone autopilot software and hardware and a Pixhawk flight controller, says Pancoast. Wheelchair motors and speed controllers drive it. Last year the battery lasted for about 2 1/2 hrs. The new one can run for up to three days before needing a recharge.

The Deer-Dash runs around the field based on programmed GPS waypoints, resting periodically for up to 2 1/2 days. Pancoast is working on a charging pad where the robot can rest and recharge. The intermittent nature of the robots action, combined with the coyote decoy, is key to its success.

Rabbits and groundhogs quickly realize the Deer-Dash isnt after them, says Pancoast. However, when deer see a coyote, they start running and will be three properties over before they stop.

Pancoast is waiting on this years results before going into production. With prices on the rise, establishing a price is also a challenge. He expects initial units could run around $6,000.

For some, that may be quickly recovered if Deer-Dash works as expected. Pancoast has been talking to an Oklahoma farmer who reports deer costing him $300 per acre.

Im trying to evaluate the market, he adds. I dont know how many people have enough of a problem with deer to spend money on a solution, or how much they would be willing to spend.

Pancoast encourages FARM SHOW readers to share their interest and the extent of their deer problem with him.