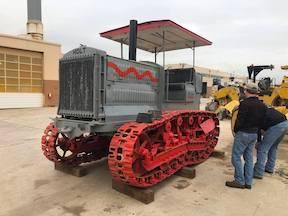 After sitting on display for the past 20 years, Scott Vouk's 10-ton Holt track tractor was sawing logs this past Memorial Day. For Vouk, it was a dream come true. Built in 1919, the gas tractor spent 63 years with the Vouk family before being auctioned off. When Vouk saw it in a photo from the 2018 Antique Caterpillar Machinery Owners Club show in Houston, Texas, he knew it was the family tractor.

"I recognized the canopy my grandfather John built for it after his brother Bill bought it in 1938," says Vouk. "There was also a belt pulley on the back and a bracket for headlights on the radiator that my grandfather and great uncle had made.

In 2001 his great uncle sold the tractor to Benjamin Holt III. Holt's namesake had started what became the Holt Manufacturing Company. It merged with the C.L. Best Gas Traction Company to form the Caterpillar Tractor Company.      Vouk contacted CEO Peter Holt and asked what the plans were for the old tractor. When Holt learned Vouk's family connection to the tractor, he and his sister Corinna Holt Richter decided to gift it back to the Vouks. In exchange, Vouk and his father Tom agreed to donate to an area technical college they and his sister had attended.

This past January, Vouk went to Texas to retrieve the tractor. After making initial repairs, he fired it up and belted it up to the family sawmill at a small gathering of family and friends.

"We ran it on the sawmill for a few hours and plan to use it on the threshing machine this summer," says Vouk.

While initial work got the tractor running, he says there is much yet to be done. The family used it hard for 12 to 15 years and then periodically from 1965 until 2001 at Vouk Steam Shows.

"It was very worn out when the Holts bought it," says Vouk. "We are currently collecting parts, which is not the easiest thing to do with a tractor this old. We replaced the exhaust manifold with one from California."

If FARM SHOW readers know of parts from 10-ton Holts, Vouk would appreciate hearing from them.