He Built His Own "Hay Float" 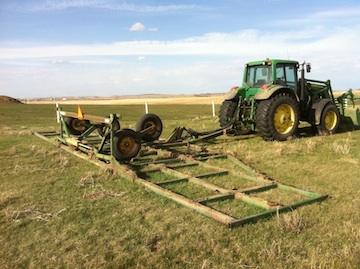 He Built His Own Hay Float

Why pay to rent something when you could make your own? Clarence Kooistra of Strathmore, Alberta, Canada, didnt want to keep renting hay floats to level out his alfalfa fields. So, he rebuilt an old cultivator that works as well as the equipment he had been using.

Renting equipment is always expensive, he says. Plus, you need to make sure one is available at the time you need the float, so my partner and I decided to build our own.

Kooistra found an old cultivator frame with no shanks on it that would allow him to add hydraulics to push the wheels up through the frame so the weight of the frame and wheels would help level his fields.

We found the cultivator on a dealers lot and wondered who on earth would buy a cultivator frame on wheels with nothing on it and came up with no one as an answer, Kooistra says with a laugh. I should have bought a lottery ticket that day.

Because the frame was empty, it only took 15 to 20 hrs. to get the frame ready to work as a hay float. Clarence went back to the rental business to look at the hitch design.

I wanted a floating hitch so the frame would follow the contours of the ground, he recalls. I didnt need it to be stiff. I took some pictures at the rental place and went home to build one the way we wanted it.

He made a hitch with a couple pins that allow it to move up and down. A hydraulic cylinder pushes into an upright to force the frame off the ground.

We had to adjust the linkage so the wheels would lift farther up when were in the field and only halfway through the frame to lift it off the ground for transport.

When they move between fields, the hay float is only a foot-and-a-half off the ground.

Adjusting the linkage on the hydraulics for the transport wheels involved moving one of the stops of the cylinder so that it would start lifting the wheels sooner.

His hay float has a V-shaped bar at the front with 3 straight-across bars behind, as opposed to just one bar on a regular hay float.

The 3 bars improve on what a regular hay float can do, he says. When gopher mounds get hit by a regular float, sometimes the dirt simply falls over the top of the bar. In this case, 3 bars are spreading the dirt out to level it.

They also use their homemade float to spread manure out in pastures. Once its dry, the bars break it up and pulverizing the manure..

Kooistra says they have no plans to mass-produce their home-built hay float. They use it on their land and let the neighbors borrow it.

They like the way it works, he said with a laugh. I borrow their post pounder and they borrow my hay float. I dont rent it out.