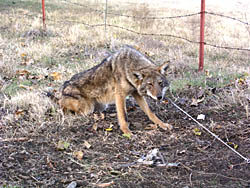 Catching coyotes, foxes and wild dogs is no easy task, especially near urban areas where traps or bait are often neither legal nor tolerated. However, a new snare-type trap is getting great reviews around the country and around the world. The Collarum from Wildlife Control Supplies (WCS) has caught coyotes in Los Angeles, dingoes in Australia and hyenas and jackals in Iraq.

"The Collarum is canine specific for live capture," says Alan Huot, WCS. "That means it's designed to be triggered only by canines. To set it off, they have to bite and pull on the trigger mechanism. Raccoons, rabbits or skunks can't trigger it."

Because it is live capture, if you do catch someone's pet dog instead of a wild troublemaker, it's not a problem. Most domestic dogs will simply sit down after being caught. Even coyotes are seldom harmed by the snare. In fact, 70 percent of captured coyotes show no significant injuries.

While canine species are notoriously difficult to catch in a cage and traps are dangerous to non-target animals, the Collarum is getting a reputation for success. One Animal Control Officer (ACO) reported setting it 12 times and catching 11 feral dogs.

"The University of Arizona had a dog running loose on campus and hadn't been able to catch it for months," says Huot. "They put out a Collarum, and they had him in the first day."

One of the secrets to the device's success is the special bait that is highly attractive to canines. "It was developed by a predator trapper and makes the dog or coyote want to bite and pull, not roll on it or lick it," says Huot.

The spring-loaded Collarum is laid out on the ground with the end of the capture loop anchored to the ground. When the animal bites and pulls on the baited trigger, a cable loop is thrown over the head and around the neck.

"The deluxe kit is really designed for professional trappers," says Huot. "The ACO Special has everything needed including a tongue depressor to spread the bait and a DVD that shows how to use the Collarum."