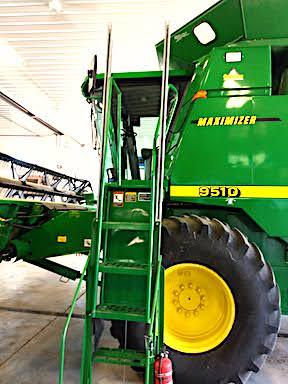 At 80, LaVon Johnson still enjoyed helping out at harvest time but it was difficult for him to climb the ladder of the combine. When his son, Tim Johnson, saw a YouTube video of a lift another farmer made, he contacted the designer, who sent him photos and provided information. Now, the Wausa, Neb., farmer wants to pass the details on to others.

The lift rides in two tracks that are bolted to the side of the combine ladder, Johnson says. He bought the sliding door tracks at a home improvement store and purchased a 12-volt winch with a remote.

He built the platform and lift with expanded metal, angle iron, and scrap metal. He mounted the winch under the combines top step and ran the wiring to the battery so the winch operates whether or not the combine is running.

There was some trial and error. I cut the rails to length after I saw it was going to work. And with the platform I had to be careful to have clearance and not hit the tire, Johnson says.

Once the lift is up, the platform folds up out of the way and the ladder can still be used by drivers who dont need the lift.

Johnson moved the fire extinguisher that was on the ladder to the lift, which he painted green to match the tractor.

Dad used it for a couple of years. It was fun to watch him ride up and down on it, Johnson says, noting his father died in 2020.

Johnson posted a video on Twitter (now available at www.farmshow.com) and a Wisconsin farmer, who also had an elderly father, purchased it for Johnsons cost of materials, about $500. He welcomes questions about the lift from readers.

If I can help another older farmer keep running the combine, Im more than happy to share information, he says.