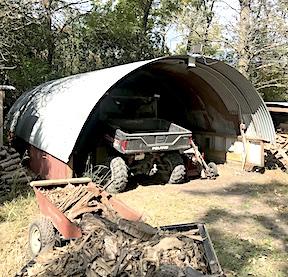 When Jack Ziegler and his son Colton were offered an old pole barn and several grain bins for free, they started thinking of ways to use them. They decided to turn them into several different buildings, including a portable hoop shed, a drive-through grain bin equipped with a garage door, a firewood storage bin, a firewood carport, and a pair of dog houses, one fitted with a large glass wall on front.

A neighbors pole barn blew down in a wind storm so we salvaged the tin and wood, says Jack. The wind was so strong that it pulled the barns 6-in. square poles right out of the ground and laid the building upside down. We tore the barn apart and saved all the wood and tin, as well as the bolts and screws.

They bolted together several bin rings to build the 15-ft. wide by 24-ft. long portable hoop shed, which they use to store small vehicles such as their Polaris Ranger and several lawn mowers. The shed, which has an open front and a full wall with an aluminum door on back, rides on a pair of skids made from 6-in. square pole barn poles. They used 2 by 4s and steel to build 2-ft. high walls and bolted the bin rings onto them to form the roof. A roof-mounted solar panel powers a night light.

We bought one garage door cheap on Craigslist and were given the other one, says Jack. One door is insulated and the other is fiberglass. Both doors were installed inside 2 by 4 frames, and their overhead tracks are supported by 2 by 4 frames suspended from the bins roof.

We used a metal cutting saw to cut out the door openings. But first we sank a pair of steel posts in the ground inside the bin, and bolted horizontal 2 by 6s onto them to support the bins wall.

The cut-out doors are equipped with rebar handles and rubber rollers on the inside to latch the door.

They store firewood in one hoop building, which has an aluminum door at one end, with an attached metal screen to  protect it from falling wood. We fill 3/4 of the building with firewood and park the log splitter in the remaining space, says Jack.

They also store firewood in several bins, placing the wood on pallets and installing roof ventilators to help dry the wood.

The men used 2 by 4s from the pole barn, and grain bin sheet metal, to build their firewood carport. The roof keeps the wood dry, and the open sides let air circulate, says Jack. If we want, we can quickly remove the sheet metal to speed up the drying process.