He Tracked Down The Story Of The Square Wheel Inventor 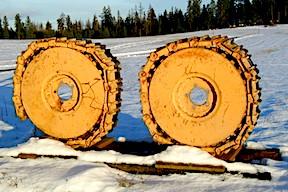 An Iowa farm boy invented and patented one of the most unusual ideas in agricultural history.  Royal Riblet and his brother Merwin conceived and built a highly complex square track mechanism in 1915 that they said could provide greatly improved traction for round wheels. More than a century later, retired engineer Charles Lyons bought a set of the square wheels and chased down the inventors history.

I was a 10 year-old farm kid in 1952 oiling up an old Case steam engine at our local fair when I heard this incredible noise over the sound of the engine and saw a cloud of dust in front of the grandstand a great distance away, Lyons recalls. That was the first time I saw or heard a tractor with square wheels.  The experience slipped my mind until 2002 when I visited a neighbor who had a set of unusual square wheels bordering his driveway. Eventually I bought them from him and now theyre along my driveway.

With the unique wheels in his posession Lyons set out to learn more about them. He learned that Royal Riblet, a Washington farmer, submitted drawings for the idea in 1913 and was granted a patent in 1915. The complex system had 16 two-foot wide tread plates that could surround any size wheel, riding on complex rocker arms that when the vehicle was moving, created the loud clamor that I heard as a kid at the fair, Lyons says. Riblet envisioned the system would provide traction for wheeled vehicles without the expense of buying a tracked machine.

The idea was probably a good one, Lyons says, but the complex engineering didnt measure up because of numerous moving parts without any bearings or greasable fittings, so rust from inactivity would seize them up fairly quick. Even those problems didnt prevent the Riblets from revising the idea and applying for additional patents in 1917 and 1929, the latest which was designed on a 4-wheeled chassis. The U.S. Army tested the square wheel idea at the beginning of WWII, but nothing came of it.

Royal Riblets inventiveness continued in the 1920s from his Spokane-area farm where he developed a pattern sprinkler system, a mechanical parking garage, and other mechanical devices.  In 1924 he designed and built a 3-story Florentine-style mansion situated 450 ft. above the Spokane River Valley. Riblets imaginative architectural marvel was one of the first homes wired for electricity and his grounds included a life-sized checkerboard, 4 acres of terraced gardens, a pool carved in basalt, an enclosed croquet court and a red-roofed stone gazebo.  Guests reached the hilltop estate on a 5-passenger tram, a precursor to the Riblet Tramway Company, which eventually built a system to span the Spokane River.

In 1979 the Estate was designated a national historic landmark and in the early 1980s it was transformed into a destination winery by Harold and Marcia Mielke.

Lyons says the destination winery welcomes more than 65,000 visitors annually from around the world, and all of them can get a historical glimpse of the Riblet invention while viewing the square wheel tractor and informational placard on display in front of the winery. The idea was definitely unique, and its nice to see that its history is being preserved, even though it was never widely accepted, Lyons adds.