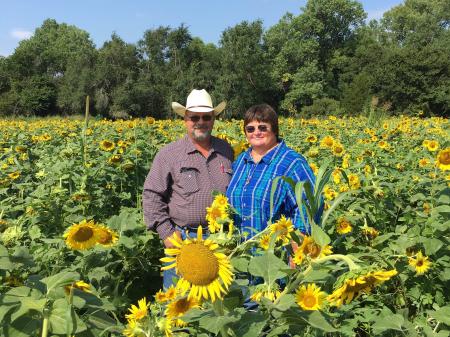 Green Cover Seed company is boosting soil health and feeding the hungry with their Milpa cover crop mix. The cover crop seed company donated enough mix for around 200 acres this year as part of their First Acre program. Farmer recipients donate the land and plant the mix. They work with area food banks, churches and other non-profits to harvest and distribute the produce as it matures.

"We also sold a couple thousand pounds of seed at cost to a group in New Mexico working with Native American tribes," says Keith Berns, Green Cover Seed co-founder, along with his brother Brian. "In addition to the First Acre donations, we sold enough Milpa mix to plant another 200 acres because a lot of people wanted more than one acre."

Berns gives credit to Gabe Brown, the North Dakota farmer who has helped lead the growth of cover crops. It was Brown who started adding some vegetable seeds to his cover crop mix, calling it Chaos Gardening.

Berns and his brother have taken it to a new level, renaming the concept Milpas after the Mayan farming system of mixed corn, squash and beans. The Green Cover Seed Milpa Mix includes more than 40 different seeds, from beans to greens, edible flowers, okra, buckwheat, cucumbers, melons and squash. It is designed for zone 4 or higher.

In 2017 Berns worked with Oklahoma farmers Jimmy Emmons and Trey Lam. "Several of us wanted to do something for the community, and we reached out to Keith," says Emmons.

The results were impressive. Volunteers with the Regional Food Bank of Oklahoma harvested around 6,800 lbs. of produce, enough for an estimated 5,440 meals. As a bonus, the farmers got a cover crop that improved soil health, water quality, and wildlife and pollinator habitat.

Berns and Emmons were hooked. In 2018 Green Cover Seed put together their first mix and donation program. It expanded the following year and continues to do so this year. The mix has evolved as well.

"The mix we planted this year had 53 different types of seeds, with about 35 edibles, planted to 3 acres," says Emmons. "We mow paths through it for people to use to access it. It's not like traditional vegetable rows. You have to hunt and pick."

Emmons reports that there are some 30 Milpa gardens of 1 to 3 acres in Oklahoma. Others are in Kansas and Nebraska and several in California.

As word spread, so did participation. Berns estimates sending donated seed to more than 15 states this year with calls from others. The company ran out of its first batch of seed this spring. A less diverse second batch also went out the door.

"We doubled the acreage this year," says Berns. "Now we are trying to figure out how to gear up for next year. Will it be 4 times as much or 10 times?"

While Berns describes the amount of Milpa seed distributed as a blip on their total seed sales, continued growth offers a challenge. "As great a program as it is, it takes time and resources," he says. "If it doubles or triples, we don't have the time for salespeople to deal with it on the phone during our busy times."

Berns' first step to meeting the challenge has been to set up www.milpaseed.com and www.milpagarden.com as pages on their  website.  In addition to people posting success and photos, he hopes they will use the pages to sign up for seed for 2021.