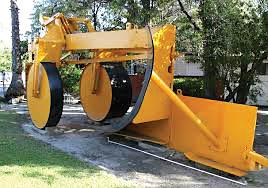 Fields flooded in 2019 might benefit from deep moldboard plowing with this worlds largest 15-ton, single share plow that turns soil as deep as 7 ft. The Post plow was used on around 1,500 acres of Missouri farmland that flooded in 1993 and 1994.

University of Missouri Extension soybean specialist Bill Wiebold and corn specialist Greg Luce recently tracked down the plow, studied the effects of the deep plowing, visited farms where it was done, and talked to the plows former owner.

The big plow dug 5 to 6 ft. deep through sand and a hardened layer of blue-black muck to churn up soil, says Wiebold. Deep plowing followed by careful tillage and good nutrient management in years to follow restored most land.

Pulling the plow wasnt easy. It took 4 D8 and D9 Caterpillar dozers linked together with cables and chains. The plow itself was 37 ft. long, 12 ft. high and 11 ft. wide. It was considered to be the worlds largest moldboard plow.

Former owner Willie Aholt recalls charging $560 per acre. He could do an acre per hour. Tractors often sunk in sand, and the hitch broke the first day, says Aholt. Welders had to work all night to fix the plow in time for day two.

Aholt bought the plow from a neighbor, adding a third wheel for stability and greater plowing depth.

Two brothers, Charles and Norman Post, built the plow in 1937. They used it to reclaim land buried by Californias Santa Ana River that year. At that time, it rented for $100 per hour. Later, it was used for cutting furrows for drainage ditches and pipelines. In the 1940s, it dug trenches for cables at atomic bomb test sites in Nevada.

Aholt reports that the plow was the last item sold at auction when his family sold their farming operation in 2001. If the new owner didnt salvage it for the steel, it might find a renewed purpose today.
Some sand remains in fields that were deep plowed, says Wiebold. It feels spongy when walked on. Today, farmers consider it some of Missouris best farmland.