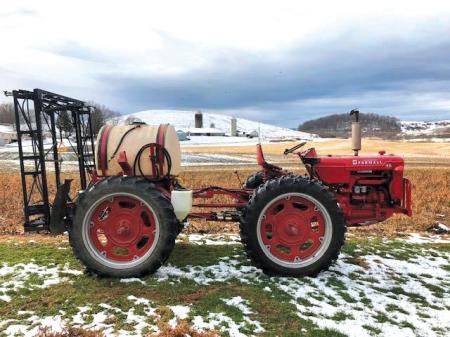 It rides on narrow tires and has high clearance. Works great to spray corn and potato crops, says William Davis, who built an articulated 4-WD tractor out of two 1950s vintage Farmall C rear ends and a 45 hp. diesel engine from a Ford 3000 tractor.

It took 3 years to build. The first year I got the two rear ends set up, the second year I installed the engine, and the third year I built the sprayer, says Davis.

The 2 Farmall rear ends face each other and are connected by a shaft that is held in place by a pair of bearings. To marry the two rear ends, the Masontown, W. Va., farmer first built a hinged frame to hold the 2 units
together. He then ran a driveshaft from the original pto on the front rear end to the back rear end, using a home-built articulated joint to provide articulation. It consists of 2 big bearings that support 1 1/4-in. dia. bolts. A pair of hydraulic cylinders that act on 2 attached channel irons are used to steer.

He powered the machine with a 40 hp. diesel engine out of a junked Ford 3000 tractor, which also provided the tractors hydraulic and steering systems. He also made a bell housing to fit the Ford engine to the IH tractor. He covered the engine with the junked hood off a Farmall C.
Both rear ends have separate transmissions
and gearshift levers, which are connected. The pto on the front transmission drives the rear transmission and rear pto.

He used 1 1/4-in. aluminum angle iron to build the 30-ft., 5-section spray boom. The booms are raised and lowered by a pair of 2,500-lb. ATV winches powered by the tractors electrical system. The spray tank can hold 200 gal., and there is a smaller separate tank for direct injection of chemicals. A pair of spring-loaded electric screw jacks assist in raising and lowering the boom, which has a spring-loaded breakaway system.
It has plenty of power, says Davis. I already had one of the tractors and bought
the other one for $300. The tractor has both front and rear
brakes. A hydraulic cylinder, operated by a master cylinder on the front rear end, is used to operate the brakes on the back rear end, says Davis.
I spent about $7,000 to build it and used only high quality parts because I wanted to do the job right.