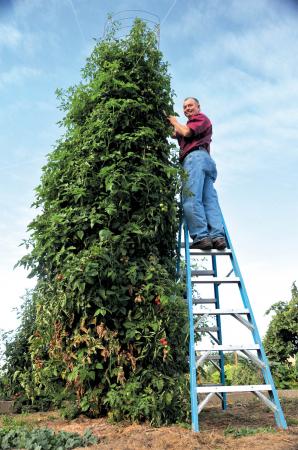 Jim Zamzow has harvested as much as 1,000 lbs. of tomatoes from his monster tomato plants that reach 20 ft. high or more, outgrowing his 17-ft. tall tomato cages. He credits sun, space, and the soil-building products he markets under his own Dr. JimZ brand.

For monster tomatoes, he pours on the plant food and dedicates a larger growing area. I prepare a plot approximately 12 by 12 ft. as the roots from the plant can grow outward as much as 6 ft. from the plant, says Zamzow. Try to select a place not too close to trees, as they will grow in and steal the nutrients.

Once the soil is worked, he spreads 20 lbs. of Tomato Secret and tills it into the top 12 in. He then digs a 1-ft. by 1-ft. hole in the center of the plot and mixes in a cup of Tomato Secret. He also adds a package of eight, 3-2-1 Planting Tabs with 11 species of mycorrhizae to aid the roots in accessing water and nutrients.

Just before the last frost date, he sets a 6 to 8-week old, non-determinate seedling in the hole and mixes an ounce of his Chicken Soup for the Soil around the plant. It is a mostly plant-based mix of minerals and nutrients selected to feed soil microbes.

I also protect against possible frost with Wall O Water or something similar, says Zamzow.

The next step is installing the support frame. For less than monster tomatoes, he suggests using a 7 by 10-ft. section of 10- ga. concrete reinforcing wire for supports. He weaves rebar vertically through the sides and wires them in place or sticks them into the soil.

His preferred monster cage is considerably larger and stronger. It should be 12 to 20 ft. tall and 30 in. in diameter, says Zamzow. I installed a permanent frame 20-ft. tall made from 5/8-in. rebar set in concrete.
He advises placing concrete inside plastic buckets to prevent contaminating the soil.

A few weeks after the soil has warmed, mulch the soil 4 to 6 in. deep from the frame out, leaving the interior open, says Zamzow. I use alfalfa hay, but chopped kudzu works well in the South. Both contain triacontanol, a growth hormone. If weeds come through, add more mulch. Mix a pint of Chicken Soup for the Soil and dampen the mulch.
As the plant grows, he advises training it to the rebar. Your plant will grow sucker stems at each branch node, says Zamzow. Allow one sucker to grow for every vertical."

Jim Zamzow pours on the plant food to grow monster tomato plants that can reach 20 ft. high or more, outgrowing his 17-ft. tall tomato cages.
support in the frame, making sure they are at least a foot apart. Train them to the support and pinch off all others.

He suggests using soft material like strips of nylon stockings, soft yarn or commercial plant ties for securing the stems. Stems should be tied loosely so as to not restrict growth.

Spread one cup of Tomato Secret inside the framework and water it in with Chicken Soup for the Soil solution every 2 weeks, says Zamzow. Spray foliage weekly with fermented Chicken Soup tea diluted 1 to 10 with water. Continue this to the end of the season, and youll have bushels of delicious, nutritious tomatoes.

While Zamzow endorses his own proven methods, he challenges FARM SHOW readers to experiment.

Variations to what I have done will also work, he says. Be creative and enjoy growing.