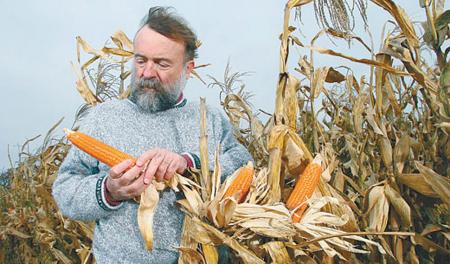 Professor Torbert Rocheford of Purdue University has developed a new type of orange corn loaded with carotenoids. Carotenoids are a natural antioxidant that provides color to carrots and other vegetables, some of which can be readily converted to vitamin A while others aid in preventing eye disease.

Rocheford, a Purdue geneticist and plant breeder, has been developing and perfecting the orange corn variety for more than two decades as part of an international humanitarian effort called HarvestPlus. The new corn type is catching on in parts of sub-Saharan Africa that suffer from vitamin A deficiencies.

Now Rocheford and his son, Evan, are introducing orange corn to the U.S. food market through their startup company, NutraMaize LLC, marketing products under the brand Professor Torberts Orange Corn.

The first product on the market is Professor Torberts Orange Corn Grits, which, the company says, makes delicious grits and cornbread with a rich, nutty, buttery flavor.

Evan Rocheford says chefs and consumers alike are responding positively to the Orange Corn Grits. Weve received overwhelmingly positive reviews. Even southerners whove grown up on grits say these are the best grits theyve ever eaten.

The corn is grown on a family farm in Indiana and milled nearby. The product is sold on Amazon.com in 2-lb. bags and is available wholesale in 25-lb. bags through the companys website.

Evan adds that most Americans could benefit from consuming more carotenoids that are associated with maintaining eye health.