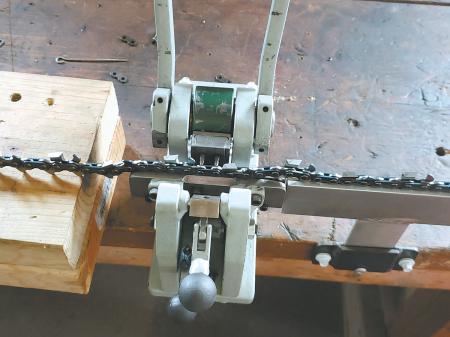 When I started my small engine repair business I wanted a way to make and sell chains for saws from bulk material, which was more economical than stocking several different sizes and types, so I invented my own chain-breaking tool, says small engine mechanic Mose Troyer. The tool worked so well I decided to offer it to other people who might want to do the same.

Troyer says his specialty breaking tool has a built-in anvil and double punches that are set in a die. In just a few minutes, while a person waits, I can put together a standard or low profile chain for any type of saw, Troyer says. The tool adjusts for  .43 to .63 gauge chain and the die is set for 3/8 or .325 pitches. Its built strong and with normal use, except for occasionally changing out punches, it should last a lifetime.

Troyer says he uses the device to make chains from roll stock he has on hand for customers that call him from just about anywhere in the country. At the same time, hes willing to sell a brand new production model breaker for $300 to anyone wanting to use it in their business or for personal use. He contracts with a custom machine shop to build the devices.

Without a tool like this Id have to stand there and punch out rivets one at a time and  keep a customer waiting.  Now its easy to make any size new chain, Troyer says.