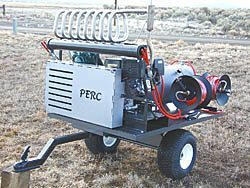 According to the company, exhaust gas is one of the most potent, yet safe and least expensive poisons for killing pest animals underground. But until now there hasn't been an economical, efficient delivery system.

According to company owners Allen Hurlburt and Virginia Massey of Tulelake, Calif., the PERC (Pressurized Exhaust Rodent Controller) method involves a 1/4-in. stainless steel wand that fills rodents' burrows with a lethal concentration of carbon monoxide before they have a chance to block the burrow or escape. The holes don't need to be sealed off because the gas is heavier than air and settles down into the tunnels.

The carbon monoxide is generated by the system's internal combustion engine, which also pressurizes it to 125 psi.

"No special use permits are required and crop stands are not damaged," Hurlburt says. "It's simple to use and safe for the operator, since there's no poison bait or explosions involved. No other control method is as effective, efficient and inexpensive as ours."

A PERC system can treat moderately infested alfalfa fields at about 3.5 acres per hour with a single operator, he adds. Each probed location requires only 15 or 20 seconds of injection time.

"Recent tests conducted by the University of California Extension Service show that the PERC can reduce rodent populations by 66 to 75 percent with a single treatment," Massey points out.

"We've shipped models from southern California to close to the Canadian border, to Oregon, and to Nevada. Most of our markets have been with alfalfa producers, but PERC has also been very successful in orchards," Hurlburt says.