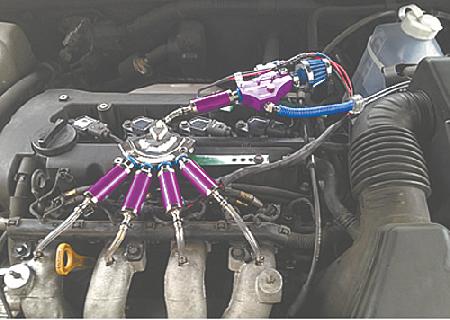 An off-the-shelf hydrogen generator and injection package from Aquatune International is guaranteed to save money and boost performance. Systems designed for gas engines and diesel engines of all sizes are ready to go. Even today's relatively low fuel prices aren't slowing sales.
"About 60 percent of our customers are mileage driven; the rest are after added horsepower and performance," says Dave Miller, Aquatune International. "Extreme systems with a hydrogen generator for every cylinder offer the highest mileage and performance. They are our best sellers and go on everything from 4 cylinders on up."
The Aquatune system injects a mixture of oxygen, hydrogen and water into the engine ahead of combustion, supplementing and improving, but not replacing, conventional fuel combustion. It can be installed without any alteration of existing engine control systems or pollution control devices. All that is needed is distilled water.
Where the mixture is injected depends on whether the engine is gas or diesel-powered and the type of engine. While a single hydrogen generator will impact mileage and performance, additional generators added to the system will increase the effect.
The company guarantees a minimum 15 percent increase in fuel economy in large diesels, 20 percent in midsize diesels, and 25 percent in gas-powered engines or your money back. Other promises include increased horsepower, plus elimination of carbon deposits due to more complete combustion.
Injection of water with the hydrogen is said to lower oil temperatures an average of 25 degrees. Cleaner burning can extend periods between oil changes.
Miller sells and installs the systems, as well as retailing them nationally and internationally. He also custom designs systems for special applications.