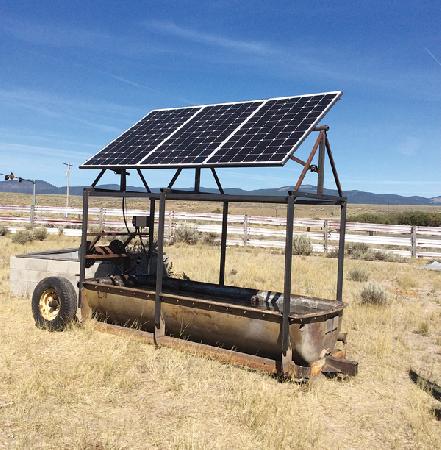 Jack Vernon of Lakeview, Oregon needed a watering system for several ranchland pastures scattered miles apart. He wanted to use solar energy but couldnt find what he needed on the market. So he built his own system.

It has a lot of capacity and can be towed at highway speeds. I use it all year long, says Vernon, who has 8 different wells scattered across about a 30-mile area.

An added benefit is that I dont have to worry about starting small engines in freezing weather, or worry if the engines will run long enough to pump the required volume. Each system can produce more than 5,000 gal. per day during winter and early spring, which will maintain up to 300 calving or lactating cows.

He built 2 similar systems, one equipped with 3 solar panels and the other with 4. The panels mount on a steel frame thats welded on top of a 10-ft. long metal trough.

The trough was purchased in the late 1950s as military surplus and was designed to ship jet engines. We used it as a stock tank for many years, says Vernon. It has a heavy metal angle iron base and holds about 450 gal. of water.

Vernon welded 2-in. square tubing together to build the frame, then mounted the solar panels so they can be adjusted from side to side depending on the sun angle and the season. Each system includes a Grundfos 20 gpm solar pump with controller and 100 ft. of 1-in. industrial rubber hose, which rolls up on a drum on back of the trough. A float switch is used to turn the pump on or off.

To transport the system, he attached the stub axles and wheels off an old Deere seeder and a junked utility trailer. A pair of hydraulic jacks from Northern Tool are used to raise or lower one end of the tank for transport.

I use a compass to align the trough true north and south, says Vernon. Then I remove the hitch, lower the trough to the ground, drop the pump down the well, and attach the hose to the trough or to an existing water distribution system that I have with some of my wells. Then I pull a pin to adjust the position of the panels, plug in an electric cord that runs from the panels to the pump, flip the switch and watch the water come out. It takes only about 15 min. to set up the trough or get it ready for transport.

Vernon welded a 1 1/2-in. valve at the bottom back end of the trough to quickly drain the water. He also attached a bleeder valve just above the pump so that during winter once the pump stops, the water will drain back down into the well without freezing up. The bleeder valve also makes the pump lighter when removing it from the well with each move, because theres no water in the hose as the pump is lifted for transport, says Vernon. Because the pump has an electric cord, I can use a generator if the solar panels cant keep up with demand on cloudy days.

Vernon says he has used both systems on his pastures, feeding grounds and calving grounds on a year-around basis, and has found them to be reliable and labor saving. Providing fresh well water in irrigated pastures increases cattle gains and reduces the need for ditch cleaning. Warm well water also reduces the need to chop ice, he says.

He says his average investment was about $4,500 for each system. However, the reduced work load and increased dependability over generators, centrifugal pumps or air compressors is worth the cost. Solar tax credits helped to offset the initial outlay, he notes.