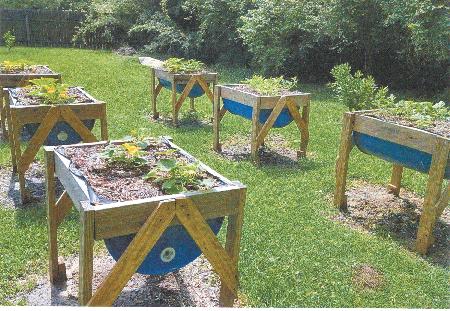 "I wanted to show your readers the raised garden beds my wife Debbie and I recently made out of some treated lumber and 55-gal. plastic barrels," says Terry Benoit, Orange, Texas.

"We've used raised garden beds for years to grow watermelons, squash, tomatoes, peppers, egg plants, corn and strawberries. But this year, we came up with a new approach using treated lumber and 55-gal. plastic barrels. I used three of the barrels to build six raised garden beds. They're high enough that we don't have to bend over to plant or pick vegetables.

"I cut the barrels in half, drilled 1/2-in. holes in the bottom spaced 3 in. apart for drainage, and added topsoil. Then I used treated wood to make a 4-legged structure for each half barrel. The barrels are recessed about 4 in. inside the upper part of the structure to make the growing area a little deeper. The vertical support legs are made from 2 by 4-in. treated wood.
"This is our first year using our new raised garden beds. We're growing watermelons and squash in them and so far, so good."