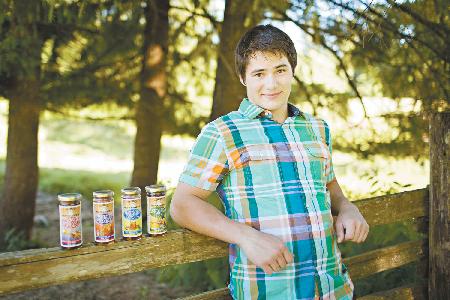 When 11-year-old Henry Miller met a beekeeper on an airplane, he had no idea it would lead to developing a line of ?hot? honey and appearances on television?s Shark Tank, QVC and other programs. Now, at 18, the college freshmen is CEO of Henry?s Humdingers, a business run by him and his parents, Denise Miller and Tom Roberts in Burlington, Wash.
Miller explains that he quickly developed a passion for bees and honey production after getting his first hive. But because other beekeepers in the area were already selling honey, he and his family realized they needed to make their honey unique. They decided to sell seasoned honey.

"It was a lot of trial and error," Miller says. "Some flavors didn't work so we just went with ones that did."

Since sweet flavored honeys were already available, their first focus was hot and spicy honey blends, starting with their raw, unfiltered honey.
Grumpy Grandpa was the first blend with cayenne and garlic, and it's not too sweet and not too hot. It's great over chicken or in meatloaf. Miller says his grandpa came up with the name for the business and the family decided to keep the quirky alliteration going with names for all their blends.
Naughty Nana blends ginger and pepper in the honey and is tasty with many veggies and pasta. Mama Drama has a smoky flavor with chipotle and cinnamon and pairs sweetly with chocolate. Diabolical Dad is Miller's favorite and the hottest honey blend with Habanero peppers and lime.
Another flavor, Hanky Panky, is a sweet blend with vanilla and nutmeg, and perfect on toast or in a fruit dip.
Many repeat customers find a flavor for recipes they like and buy bulk orders ($8.99/13 oz. jar) to keep it on hand.
Miller appeared on Shark Tank when he was 16 and received an investment offer that later dissolved in negotiations, when the family decided to keep it a family business.
"But just being on Shark Tank gave us a ridiculous amount of publicity. We had our best year from that night," Miller says. The same thing happens when he is on QVC or other programs.
His goal is to find a big wholesale buyer or two to create consistent sales.
Miller and his family now buy local honey to sell through stores and through the business's website. "We're always looking to grow," Miller says.
Along with the growth, he is committed to research and helping preserve honeybees by contributing a portion of sales to the Foundation for the Preservation of Honey Bees, Inc.