Portable Wind Machine Blows Up A Storm Of Business 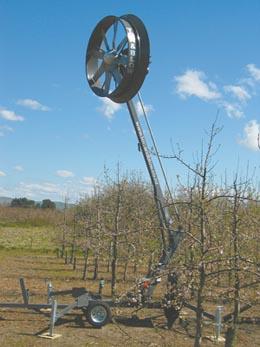 "On a sizzling hot day or a frosty 30 degree night, a big gust of wind can do a lot to save crops or livestock," says Kim McAulay, the New Zealand engineer who developed the world's first super-sized portable fan. McAulay's "Tow and Blow" is highly effective at cooling steamy livestock or combating freezing temperatures in vineyards, orchards and nurseries. He says the machine is highly adaptable because it can be towed into position on flat ground or hilly terrain and can easily be relocated.

The Tow and Blow has a 3-bladed impeller operating inside a shrouded 7-ft. dia. fan head. It raises up to 28 ft. in the air on a hydraulic arm and either fully rotates 360 degrees or can oscillate back and forth through any angle.

"We think it's one of the most interesting new products to guard against freezing temperatures or blazing heat in the last several years," says McAulay. His company has produced stationary wind machines for 23 years and marketed them around the world. Del Vanderhoff of Chamberlin Agriculture in Washington noticed the portable machine in Chile in 2014 and saw an immediate market for it. "It's ideal for frost protection, for misting, and evaporative cooling of tree, vine and ground crops," says Vanderhoff. Attaching mist nozzles makes it ideal for cooling and keeping flies away from livestock.

The Tow and Blow is powered by a 23 hp V-twin Honda engine that turns the impeller at various speeds up to 620 rpm. The engine uses about 1-gal. of fuel per hour. The fan produces only 45 db of sound at 1,000 ft., so it's environmentally friendly.

"A small vehicle can easily tow the machine to where it's needed and one person can set the outriggers, raise the fan with the hydraulic arm, and start it," McAulay says. "The Tow and Blow over comes the inefficiencies of stationary machines with noisy diesel engines." McAulay says his machine can move as much air with a 23 hp engine as a stationary machine does with a 150 hp engine on the ground. Contact the U.S. distributor for pricing.