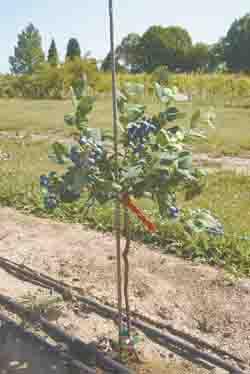 What if blueberries grew on trees instead of bushes" Dr. Wei Qiang Yang at Oregon State University says we may be just a few years away from seeing blueberry trees in gardening catalogs.

"The main advantage of trees is that they would make berries easier to pick and would reduce machine harvesting losses," Yang says. Today, 10 to 25 percent losses are common in commercial operations, he says.

Another advantage is that the rootstock for blueberry trees could adapt to soils that aren't as acidic as blueberry bushes require.

Yang credits a hobbyist in eastern Texas for grafting a rabbiteye blueberry variety on a wild, native blueberry called a sparkleberry, which grows up to 14 ft. on a single tree-like stem.

Collaborating with researchers at other universities, Yang has helped develop the process, working with the sparkleberry seeds and proven blueberry varieties. Trees are planted 3 ft. apart with 10 ft. between rows, as they would be in an orchard.

Yang's favorite blueberry varieties are Duke, Liberty and Brigitta Blue. Aurora and Draper varieties have also yielded well" equal to their bush counterparts. Oregon is Zone 8, so more research would have to be done to see if the blueberry trees could survive in colder zones.

Besides trying different varieties on 3 types of rootstock, Yang says he is experimenting with the best pruning method. Mechanically picked trees would likely be trimmed to 8-ft. tall or less for efficient harvest.

The researcher says he has been pleased with the results, and that in 3 or 4 years home gardeners may be able to buy blueberry trees.

"I think it's important scientifically," he adds. "Because we can change a plant from a bush to a tree, there might be other possibilities."