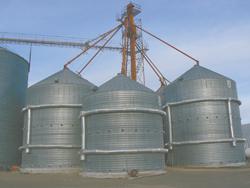 Over the past 2 years, Ben Casper dried corn 4 to 6 points using 1/5 the energy of a conventional grain dryer. His Sectional Drying System (SDS) uses fans to push fresh air through specially vented bins to dry the crop. No heat needed.

Casper encircles the outside of the SDS bins with air tubes that deliver a steady flow through perforated tubes crisscrossing the interior. As it passes into the grain, the air picks up moisture and flows into layers of exhaust tubes to exit holes in the bin sides.

"Initially, I only had one exhaust layer with holes at the base of the bin with air also exhausting through the top of the bin, says Casper. "This past year I added an additional exhaust layer in the middle for more flow."

The multiple layers create multiple drying fronts throughout the grain bin. In a 36-ft. deep, 42-ft. dia., 40,000-bu. bin, air will move only 9 ft. from intake to exhaust, compared to 36 ft. in a conventional floor dryer bin. As a result, SDS requires only a fraction of the fan capacity. Casper estimates a 24 hp fan capacity will provide 1 cfm/bu. with the SDS compared to a 180 hp capacity needed to push air through the floor dryer bin.

Casper is currently working with an engineer to determine airflow to convert a 55,000-bu. bin. He estimates conversion costs, including electrical work and construction and tube assembly, at about $1.00/bu.

"Other in-bin drying systems are limited to short (20 to 24-ft.) bins, but the SDS system works with any height bin," says Casper. "Stiffeners are required; however, either interior or exterior stiffeners are acceptable."

Casper has converted bins on his family's farm. Over the course of 2 years and many modifications, he dried 150,000 bu. of corn for a friend. He says he learned a lot in the process.

"There is extensive work that needs to be done inside the bin with the network of tubes," says Casper. "To do it right, you really need my plans and experience."

While a self-install might be possible using those plans, he advises using a professional contractor. He notes that even with a man lift and appropriate tools, installation on a 25,000-bu. bin can take up to a week and a half.

"I have applied for patents, and I hope to license or sell the design," says Casper. "In the meantime, I am gearing up to produce parts to order. Let me know exact bin diameters and heights, and we can quote a price and begin the process."