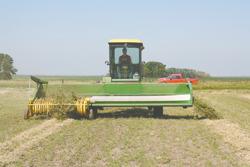 Minnesota dairyman Irwin Raak says the 2 1/2 months of work and just over $9,000 he spent to build a self-propelled windrow merger is probably the best time and money he's ever spent on his farm.

"We had a 40-year-old self propelled Deere 2320 swather with a good engine, good cab and good transmission that nobody would give us a dime for," says Raak. "After it sat in the shed for 2 years I figured out a way to re-build it into a merger for a lot less than buying a new one. Now we've got a self-propelled merger with an air conditioned cab."

Raak drew up the plans for his project and had a machine shop in nearby Jasper, Minn. do the work. "I was in there every day for a few hours interpreting plans for them and answering questions," Raak says. "We dismantled the whole platform, took off the reel, the cutter bar and the draper belts."

They cut the platform frame in half next to one of the center draper belt drives, then removed 4 ft. from the frame and back wall of the opposite side. They welded the frame back together so the draper belts ran just a few inches apart on a 16-ft. wide platform rather than 20-ft.

"We reversed the drive on one of the draper belts so it went the same direction as the other one," Raak says, "then we cut an opening in one end of the platform so the merged windrows would slide to the ground as one."

Raak bought a used 8-ft. tine pickup with idler wheels from an Aberdeen, S. Dak., scrap yard and mounted it to the front of the platform. It's powered by a hydraulic orbit motor with flow control regulated by a lever in the cab, so the pickup speed can match ground speed, which is usually 4-5 mph.

"This machine is really a great addition to our haying operation," says Raak. "It's self-propelled, has a nice cab, and I don't need a tractor pulling the rake to merge windrows any more."

Raak says they can now merge 2 windrows from their 18-ft. swather for the first cutting hay, and 3 windrows if needed for the other cuttings in front of their Claas 840 chopper. Raak and his family operate a 450-cow dairy operation and put up 4 cuttings of alfalfa on 200 acres a year. His son Philip is a partner in the farming operation and grandsons Matthew, Andrew, Joshua, Jacob and Caleb are all active in the daily chores and activities of the farm.