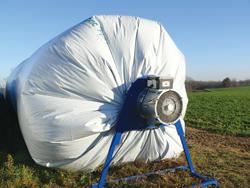 The whole idea is to force air through a bag to dry bales down. It protects bales from the weather and preserves hay quality, at an affordable price, says inventor Owen Brown about this first-of-its-kind Air Barn bale bagger.

What makes the bagger unique is that bales are pushed into one end of a long sausage-type silage bag using a specially designed, square bagging frame. But instead of shrinking the bag against the bales to keep air out, the Air Barn uses a large fan to dry the bales.

Were not trying to make haylage. Were trying to dry the hay down by distributing air evenly around it, says Brown.

The 2-wheeled, self-contained bagger can be pulled behind a tractor or pickup to the desired location or simply lifted and hauled with a front-end loader. It was developed to handle bales made by the companys Bale Band-It, which is pulled behind a small square baler and is designed to group 21 bales together. The machine automatically wraps the bales tightly with steel bands and then ejects the bundle on-the-go. However, the Air Barn can also handle big square bales and round bales.

The Air Barn system consists of the bagger frame, fan, fan stand, and bag. The operator uses a front-end loader to load bales into the loaders bale chamber, and then uses the loader bucket to pull the bagger backward to make room for more bales. The process is repeated until the tube is filled, and then the finished end of the bag is closed to the desired diameter to control air flow.

A pair of hinged metal side panels on the loader serve as deflectors to help guide the bale into the bag.

The initial cost is a lot less than putting up a new building, and its an expandable system that can be used anywhere as long as theres electricity. All you need to do is add more bags and fans, and you can set up storage anywhere you want, says Brown. We used it for the first time last summer and it worked great. We stored 126 Bale Bandit bundles, or 2,656 small square bales, in each 250-ft. long bag. The hay is left in the bags until its ready to be fed or sold.

The result is higher quality bales than you get with barn-stored hay. In fact, the bag actually provides a better environment to dry hay than you get in a traditional barn, which results in a higher quality of hay. AgriKing, a national feed company, did tests on our hay and found it was 13 points higher in feed value than the same hay that we put up in a barn.

Brown says the machine is designed to use a conventional 12-ft. dia. silage bag. Were fastening the bag to a square frame instead of a round one. The finished end of the bag is fitted with eyelets spaced 3 ft. apart. We put a rope through the eyelets and gather the bag together so the fan can blow the bag up.