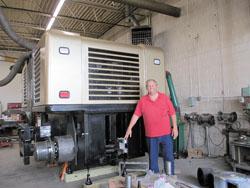 Terry Anderson started from scratch to build a better tractor. Making its debut this fall at the Big Iron Farm Show in West Fargo, N. Dak., his driverless tractor does nearly everything a traditional high horsepower tractor can do. But he says it does it better and for half the price. Named the Spirit, the shiny gold tractor is powerful and simple. Instead of a transmission, differential and axle, it has 2 powerful engine/generator sets that drive 4 electric wheel motors.

We set out to build a reliable tractor with the most practical components we could find, says Anderson. We have had lots of help from companies that believe in what we are doing. Wherever possible, we use off-the-shelf parts. Anything on this tractor can be repaired in a couple hours. It will require minimal parts inventory.

Anderson is a retired consulting engineer and serial entrepreneur who has started and sold 7 companies over 35 years. He got the tractor idea while visiting a farming cousin about 13 years ago. After pointing out all the features he would never use on a big, expensive 4-WD, the cousin challenged Anderson to come up with a better design. With the help of a network of 47 professionals he had worked with before, he decided to tackle the challenge.

Tractor architecture basically hasnt changed since the 1920s, says Anderson. After studying the problem, we realized we could build a 200 hp tractor for less than $100,000 and achieve comparable savings on larger machines.

Durability, simplicity and, where needed, redundancy were his goals. The tubular steel frame on the 8 1/2-ft. wide tractor is fashioned after General Electric railroad engines. The design offers strength, yet flexes as it travels over uneven surfaces. The width and the weight (maximum 30,000 lbs.) make it street legal.

Twin 4-cylinder, 202-hp diesel engines, each with their own 150 kW AC alternators, offer redundancy and efficiency. Together they put out more than 400 hp (optimal output is still being evaluated). Even if one fails, the second can power the Spirit out of the field and back to the shop. In transit or with lighter loads, one unit can shut down, saving fuel. Anderson says diesel/electrics can produce horsepower 15 to 25 percent more efficiently than a traditional diesel and will last longer.

The entire electrical system is designed for safety and long life. The generators are connected by 3/4-in. cable from the 650 VDC bus directly to the wheel motors. There are no plugs to come loose or cause problems.

The wheel motors are the most widely used 4-pole induction motors designed to serve as rims for the truck tires at each end of the tractors 25-in. wide tracks. Again durability and longevity rule. All bearings on the motors are oil lubed and cooled.

Drive wheels front and rear eliminate the stress that occurs with single drive units and the complexity of controlling two mechanical drives.

Coupling front and rear wheel motors electronically is simpler and less expensive, explains Anderson. With the computer control of the electric drive wheels, we can control wheel slippage and other factors with unbelievable accuracy.

Unlike traditional tracked tractors that turn if traction is lost on one side, the Spirit has a traction control system that uses the implement being pulled as leverage. It instantly moves power from one track to the other without slowing down and continues on course.

At first Anderson envisioned a tractor with a cab. About three years ago he decided to go driverless. Farmers he talked to described worrying at harvest about getting fall tillage done.

With our autonomous tractor, they can have one pull a grain cart to unload the combine while another one operates tillage equipment, says Anderson. The combine operator can control the one on the grain cart, and the other can work on its own.

Unlike other companies working on driverless tractors, Anderson says GPS is not dependable enough to control the machines. Instead he opted for dual ag positioning systems that map and control the tractors path. Two positioning controllers and two safety controllers rely on lasers and radio for accurate positioning and collision avoidance at all times, even on hilly terrain.

There are 10 computers on the tractor, 2 involved with navigation, 2 monitoring and controlling tractor operations and components, 4 managing the drives and 2 managing the hydraulic system, explains Anderson. The navigation and tractor controllers are constantly verifying where the tractor has been, where it is, and where its going. If they arent in agreement, the tractor will shut down.

Once the unit has been guided around the field, the controllers ensure the unit stays within field boundaries. Matching touch screens on either side of the tractor can be used to program the tractor for field operations. Steel doors protect the screens when not in use.

To set up a field, just go to the edges and pound in pipes to mount the simple 4-in. dia. by 6-in. solar-powered transponders, explains Anderson. You use those same locations in the field from then on.

Using the touch screens, the operator inputs data such as implement size in answer to queries from the computer. If left to itself, the computer will determine at what point a disk or planter should be lifted for an upcoming turn or returned to ground contact.

If an operator prefers, he can over-ride the computer with alternate instructions, says Anderson. Should the tractor shut down, the screens will tell the operator why and request instructions for what to do next.

Reading signals from the transponders, the controllers adjust the flow of power every 100 milliseconds according to position, status and where the tractor is to go in that amount of time. If there is a problem, it will shut down instantly.

These controllers have been used for 20 years in the north Atlantic to control ships servicing oil rigs so they dont hit the platforms, says Anderson.

While the unit can be trained for field operations, it can also be controlled by a hand-held remote. Rather than program it, the operator shows it the edge of the field and tells it what to do. Whenever desired, the operator can back up to the Spirit and tell it to follow. Spirits controllers lock on to the lead vehicle, and follow precisely.

We have multiple sensors, so if one fails, others are locked on, says Anderson. If it doesnt have twin lasers locked on, it wont move.

Implements are manually connected using the remote. The Spirit is equipped with hydraulic pumps (up to 60 gpm capacity), hydraulic valves (up to 12) and can be equipped with an optional, variable speed pto.

The beauty of variable speed controllers and electric motors is that when hydraulic power is needed, the motor on the hydraulic pump can hit 5,000 rpms if needed to fill the system with oil as fast as possible, explains Anderson.

For really large jobs, two Spirits can be coupled to work as an articulated 800 + hp tractor. The center frame accommodates a 5,000-lb. (525 gal.) capacity water tank. Changing the weight to match field conditions is as easy as adding or discharging water. The lattice frame also hosts a 400-gal. fuel tank.

Anderson plans to build 25 of the tractors in 2013 in a plant near Fargo. He expects output to grow to a minimum of 1,000 a year with additional plants in Canada and other states to follow.

Requests for tractors have been pouring in from around the country and internationally as well. One caller wanted to reserve the entire first years production. Anderson is determined to keep initial output to the planned 25 with a preference to keep them within 200 miles of the factory for fine-tuning.