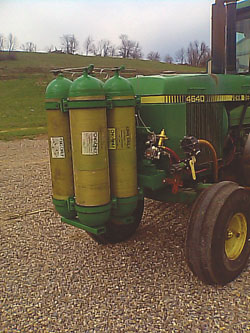 We have natural gas fumigation systems on a pickup and on our Deere 2-WD and 4-WD diesel tractors, and they work great, says Warsaw, Ohio, farmer Ed Jones. Burning natural gas with diesel boosts horsepower by about 30 percent, helps the engines run cleaner and saves us money on fuel. They have natural gas wells on their farm so the product is readily available. They capture gas from the line with a compressor that fills tanks on the equipment.

Jones says his 4-WD tractor has two storage tanks that are equivalent to about 25 gal. of diesel fuel. The 2-WD tractor has four tanks mounted on the front of the tractor frame. His truck uses a CNG tank that he hauls in the box. In the fall, he uses that same system on his Deere 7720 Combine.

All of his systems feed natural gas from the canisters through a valve and regulator into the air intake between the air cleaner and the turbocharger. The tractors and truck start on diesel fuel and switch to CNG after the engine warms up to about 140 degrees. Vacuum created in the air pipe as the engine load increases pulls in the CNG. Jones says its an economical and trouble-free system.

In the tractors we usually can run a full day on one fill, depending on the work were doing. I can really notice the difference in power output on the 4-WD and in the combine when were using CNG, Jones says.
Hes also saving fuel with a CNG system on a 4640. When that tractor runs at wide open throttle it uses a lot of fuel, Jones says, even though its not pulling a full load. We switch it over to CNG for baling and spraying and save a lot on fuel costs.

Jones figures his cost for CNG is only about 50 to 60 cents a gallon because theyre compressing gas from their own wells. If we had to buy it from a station it would be considerably more, but still economical, Jones says.

His 2005 Dodge pickup with a Cummins diesel engine also runs on CNG and Jones is pleased with the results. I took it on a road trip to Indianapolis and got 54 miles per gallon. I think its safe to say were doubling our fuel economy and getting 30 percent more horsepower, Jones says.

A neighbor who hauls grain and lime for Jones is using a CNG system on his diesel semi-tractor and getting 10 to 14 mpg compared to 6.5 to 7 mpg with straight diesel. We were concerned about engine heat when we first installed these systems, Jones said, so we put exhaust temperature gauges on to make sure everything was okay. We compared the temperature with plain diesel and with CNG pulling the same implement. The engine temperature was actually cooler running on CNG.

Jones cautions anyone running a CNG system not to overload the engine. With the extra power it puts out it might be possible to overload the cooling system, so a person shouldnt get greedy with that power, he says.