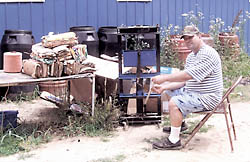 Why spend money on firewood when cardboard will do?

That's what Phil Orlowski wondered, and he did something about it. He modified a small hydraulic press to convert cardboard -- and other household paper waste -- into "logs" for his wood stoves.

"My cardboard logs produce about as much heat as wood. It's a cheap way to heat my home and garage," says the Imlay City, Mich., man. "But my main goal was to reduce the waste of materials that would otherwise get thrown away. I use anything that will burn, from cardboard to empty feed bags to grocery bags to 12-pack pop cartons. I burn the cardboard logs in a pot belly stove in my garage, and in a wood burning stove in my home's basement."

Once the container is full, he places a 6-in. sq., 14-in. long pressure-treated board on top. Then he pumps the jack until maximum compression is achieved. After removing the smashed cardboard, he ties each bundle together with baling twine. He leaves the bundles outside to dry for two days to a week, depending on weather conditions. Then he stacks the cardboard logs in a shed until he's ready to use them.

"I've used this idea for about three years and it works great," says Phil. "Cardboard logs burn great as long as they're dry. My total cost was very inexpensive -- and my operating costs are almost nothing. This process requires no electricity or fuel of any kind."

The material he uses comes from various sources. "I get some of the cardboard for free from a local store. I use a lot of 50-lb. feed bags for my livestock which work great, too. It takes 10 to 12 feed bags to make each log, and six cardboard boxes measuring 2 by 2 by 3 ft."

When Phil welded the smashing container together he left some open space around the sides for water to drain out.

According to Phil after a while the water in the barrels can start to smell bad. "To solve the problem I just add a little pine cleaner to the water -- it not only kills any mosquito larvae but also keeps my hands clean, too."

Phil says he can make about five logs per hour. "Last year I made about 250 logs before the cold weather set in. I figure that 1,000 cardboard logs is equal to about 1 1/2 cords of wood."

He says making cardboard logs is a good way to teach responsibility to kids. "It teaches kids the value of recycling, and also gives them something productive to do. If you spend a half hour a day on this, it won't be long before you have a big pile of fuel."