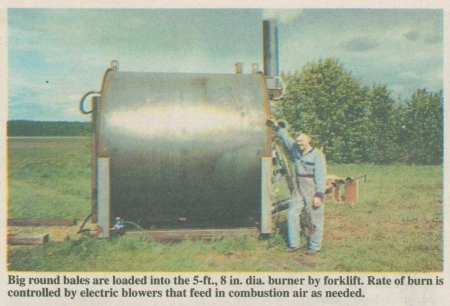 Once every three or four years flax producer Chris Somerville is able to sell his flax straw to paper companies. "Otherwise, it's sort of a waste product," he says.

But now the Hartney, Man., grain farmer has a new way to put his flax straw to work. He's going to burn it in his big new bale burner that will heat his shop, home and a couple of other farm buildings.

"We built a prototype in 1993 and burned eight big wheat straw bales in it that summer," says Harry Toews, inventor. "It worked better than we'd ever dreamed. The amount of smoke varies with the material you're burning and the moisture content of the bale. There are only a couple of pails full of ash left after burning because it burns so extremely hot. Ash is removed by an auger."

Based partly on technology from Denmark, where it's common for farmers to heat their homes and buildings with straw burners, the firebox on Toews' 6,500-lb. steel plate unit is 5-ft., 8-in. in dia. and 8 ft. long. Big round bales are loaded into it with a forklift. The casing around the fire-box holds 1,800 gal. of water, and the firedoor and rear hold water in hollow cores as well.

The bale ignites through an opening in the back of the unit and electric blowers inject fresh air into the firebox to feed the fire, which lasts from four to 12 hours depending on the kind of straw being burned. Seven small pumps underneath the unit circulate water through pipes connected to a series of radiators. An aquastat keeps ternperature in the water chamber steady, and a thermostat controls temperature in buildings, which are connected to the burner with underground pipes.

"This all started because, year after year, when we'd show our wood boilers at farm shows, farmers would come up and ask us if we couldn't build something to burn round straw bales in," says Toews. "Now that we've done it we get calls about the straw burner every day."