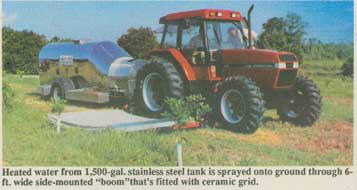 If you've ever dumped a pan of boiling water onto grass or weeds, you know what happens. Everything green curls up and dies.

That's the principle behind a first-of-its-kind machine, invented by a Florida farmer, that replaces herbicides with hot water. A Minnesota manufacturer developed the new "Aqua Heat" machine and has put it through extensive testing at universities across the country.

"It has a 100 percent kill rate on annuals and newly emerging weeds. Established perennial are killed down to their roots," says Dr. Harry Rajamannan of Agro-K Corp., manufacturer. "You can completely kill perennials with more than one treatment but, in most cases, one application slows the weeds enough to give the crop a running start."

The machine consists of a tow-behind 1,500-gal. stainless steel tank with a large stainless heating coil that brings water up to 220 degrees using number two diesel fuel. Water is then sprayed onto the ground through a 6-ft. wide side-mounted "boom", fitted with a ceramic grid. Depending on the application, booms can be built to a variety of widths. Electronic sensors adjust water heat and output according to speed and can be manually adjusted depending on the type of weed being treated.

"Our goal is to totally eliminate the need for chemical herbicides. Different configurations will be available for a variety of crops," says Rajamannan, noting that the most interest in the new machine will probably be for high-value crops like citrus, apples, and other orchard crops, as well as for vegetable crops. One use that's already caught on is as a foliar dessicant in potato and cotton crops. And, in some areas of California, it's being used during winter to kill alfalfa tops, at the same time eradicating certain weeds and killing alfalfa weevils. In addition, Rajamannan says the hot water weed killer is ideal in parks and other areas where chemicals herbicides cannot be used.

Operating costs are comparable to or even less than current chemical expense on a per acre basis. The ideal travel speed is about 1.5 mph to get 100 percent kill in a wide variety of broadleafs, grasses, annuals and perrenials, but many broadleaf annuals -- the easiest to kill -- can be handled at speeds up to 4 mph. "It's not always 100 percent effective, but neither are most chemicals. Our goal is to do an equal job or better," says Rajamannan, noting that the machine uses between 100 and 200 gal. of hot water per acre, depending on the extent of the weed problem being treated.

The key to success is proper timing. "If we can get weeds in the early stages, we can use less water and lower temperatures and go faster," says Dr. Megh Singh at the University of Florida at Lake Alfred who's been testing the concept. Dr. Gary Ritenour at California State University in Fresno, has also been involved in early prototype testing.

Rajamannan plans to have machines on the market by the end of 1993.